Media literacy is an essential life skill required to navigate the complexities of modern life, in particular in regard to fulfilling various other citizen rights, such as the right to vote. Having opportunities to increase one’s media literacy is integral part of freedom of expression, as prerequisite of realizing this human right both in the sense of generating and publishing contents, as well as the complementary right to receive information which is truthful and relevant.

The state of media literacy is similar across the region of Central and Eastern Europe, concluded the participants of the international conference e-Society.mk: Fact-Checking and Influence of New Technologies on Journalism, held in Skopje on January 31, 2017. Thus, we can examine the situation within one country, Macedonia, as typical example.

Media manipulations had been instrumental in influencing the outcome of elections in democratic states by shaping citizens’ political views, and by withholding information necessary for citizens to become informed voters. Misleading political propaganda and “fake news” (intentional dissemination of disinformation) had been major contributing factor to rise of undemocratic and authoritarian tendencies in Macedonia, leading to decline of freedom of expression.

In the context of the global rise of extremist and populist political movements, the topic of media literacy has gained a global prominence, with the education of the citizens widely considered a top priority by long-term media literacy practitioners. In Macedonia, media monitoring activities undertaken by state institutions and watch-dog organizations have demonstrated that most dominant media outlets don’t follow journalistic standards, thus depriving citizens of the right to form opinions freely. In parallel, there is a growing acknowledgement that increasing the level of media literacy is the best response to the proliferation of media manipulations.

According to the national level survey conducted by Metamorphosis in 2016 and 2017, only 5% of Macedonian citizens claim they fully trust the media. Most citizens recognize media manipulations (50% recognize bias and hate speech, 60% recognize distortion of facts, 70% recognize political propaganda), but have no knowledge on who should react if media act unprofessionally. They would be willing to engage in public discussions on improving media quality if they would know their voice would be heard (49%) or would not suffer consequences (25%). 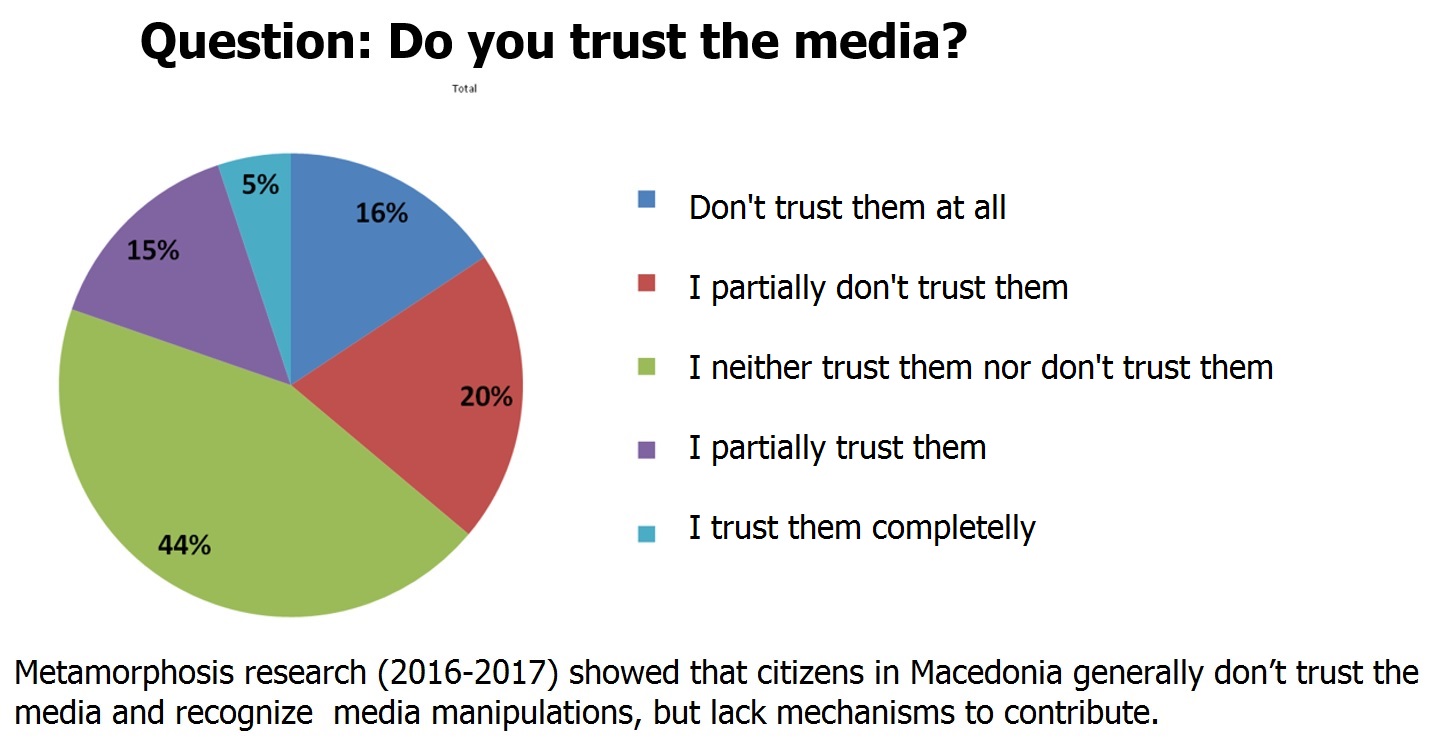 Research by the Agency for Audio and Audio visual Media Services (AAVMS) on media literacy among adults in Macedonia also showed that the dormant potential for application of critical thinking in the media sphere, with only 27% of respondents reporting they have shared opinions on media quality.

The Role of Formal Education

In Macedonia, according to relevant policy documents, the state education system is supposed to mainstream media literacy within the curricula for primary and secondary schools, but in practice such contents is rare and often ‘optional.’ Nominally, it should be integrated within curricula for mother language and social sciences.

Closer examination of the public school curricula shows, that even though goals of the subject “Mother Language and Literature” include enabling secondary school students “to use their linguistic-literary and communication skills to experience, understand and critically relate to media” and to “adopt axiological (esthetic, ethical) systems compatible with fundamental values of democratic society,” it doesn’t contain specific lessons aimed at development of these skills.

Media literacy contents is explicitly present within just two elective subjects for only one type of high schools (gymnasiums), which are not offered in trade schools, sports schools and art schools:

Тhe Macedonian Law on Audio and Audiovisual Media Services has an explicit goal to develop media literacy, and charges the AAVMS with a legal competency “to incite media literacy” (Article 6).

This law also stipulates an obligations for the Public Broadcasting Service Macedonian Radio Television to “create and broadcast programs related to inciting media literacy” (Article 110). Even though the private media are not required by law to engage in media literacy promotion, the European concept of media also considers providing access to educational contents as one of the prime functions of general (non-specialized) media, alongside providing information and entertainment.

However, there are very few examples of Macedonian broadcasters producing or disseminating contents related to media literacy. Rare exceptions include promotional and educational clips declared by AAVMS to be of public interest, such as localized versions of EAVI videos “A Jurney to Media Literacy,” broadcasted as public service advertisements.

Such videos on media literacy, are mainly aired by public channels: the PBS MRTV and the TV Channel of the Parliament. In some cases they are product of cooperation between the AAVMS and CSOs like as MIM or Eurothink.

Participation of media outlets in initiatives to promote media literacy and professional standards is sporadic, as most of them lack capacities or resources to engage in producing of such contents. Due to the complex political and economic situation, most of the independent media struggle to survive and have limited staff, focused on daily news reporting – which they consider their primary function.

Lack of their capacities results in low participation of media in public education efforts, esp. on media literacy and promotion of professional standards, even though such efforts would help alleviate their reputation among their audiences.

An example of cooperation is the project “Improving media literacy education in Macedonia” lead by MIM 2009-2011, involving capacity building of school teachers. It served as basis for publishing a newspaper “Medium” made by and for high school students, as an insert in the newspaper “Nova Makedonija.”

Metamorphosis experiences demonstrate the high potential of joint engagement of CSOs and media outlets. For instance, over 68 websites, mostly run by online media outlets, took part in the decentralized distribution of the public education contents generated by the Media Fact-Checking Service between 2013 and 2017. The Service allows free distribution of its entire articles through Creative Commons licenses, under condition of attribution of the source. Participating media republished this analytical contents, promoting the professional standards of journalism in their commentary sections, contributing to expanding the circle of readers included in the public debate on media quality.

Another example is cooperation between CSOs who fight hate speech, a very important aspect of defending freedom of expression in Macedonia. Initial bilateral cooperation between leading CSOs, for instance between complementary projects like Metamorphosis’ platform Stop Hate Speech Online, MIM’s Bezomrazno (Without Hate), as well as with Helsinki Committee’s platforms for mapping hate speech and hate crimes, lead to founding the informal network Platform Against Hate Speech, composed of ten CSOs in 2016.

Multi-Stakeholder Cooperation As A Solution

In April 2017, the Media Literacy Network of the Republic of Macedonia was created, with the aim of facilitating communication and consultations among various entities in the country engaged in raising the level of media literacy of all citizens. It is supposed to contribute to more frequent cooperation among the relevant stakeholders and to ensuring better and sustainable results of the projects. Established at the initiative of at the AAVMS with EU support, the Network consists of 35 founding members (5 public institutions and ministries, 18 CSOs, 2 educational institutions and 10 broadcasters), and is constantly open for new members.

One obvious field of joint work is in the area of policy making. The Ministry of Education and Science, which is under new management since June 2017 after the change of the government, has expressed political will to cooperate with CSOs on educational reforms, including improvement of media literacy education within the official curricula.

The need to spread media literacy among the general population requires further involvement of wider group of stakeholders, especially mainstreaming public education efforts within the work of grassroots CSOs working at local level, the media at large, and in particular the local media. Both local CSOs and local media have established channels of addressing the members of their communities and levels of trust which are beyond the scope of national CSOs and media. If provided with capacity building that would make them active participants in the media literacy efforts, they have the potential to build trust at much higher levels than national CSOs and media.

To achieve these goals, the technical and management capacities of local CSOs and local media need to be improved at several levels. Their teams are often small and have to deal with very limited resources. Providing support for partnerships and local level, as well as including them within wider networks of cooperation at national level, can be the first step in this direction. Participating in joint initiatives, involving mentoring or coaching by more experienced CSOs, can help them become more capable and confident in establishing joint projects with media, as well as seeking donor support for further efforts.