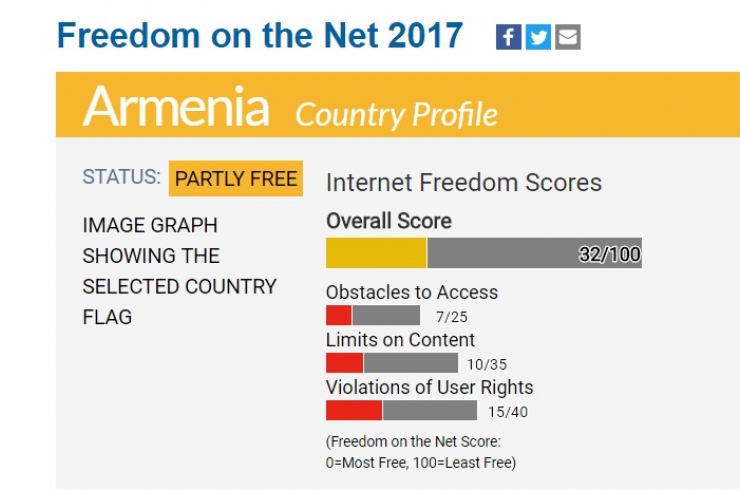 The Freedom House report notes that the government does not usually block or filter the internet, but Facebook was briefly restricted in 2016 when armed opposition figures took over a police station in Yerevan.

According to the report, after the 2016 April War, pressure on media outlets and journalists covering the conflict eased up.

Overall, the internet is relatively free, activists regularly use social media as a tool to promote their causes, and opposition and independent media flourish online.

Internet access in Armenia continues to grow. The ISP market is relatively diverse, with foreign-owned as well as local providers competing for customers in the capital and major cities, but not in rural communities. Some communities have one or two ISPs, and there’s no competition between them.

Internet is ubiquitous in the capital, Yerevan, with most shopping malls, cafés, universities, and many schools providing free Wi-Fi access. There is also Wi-Fi connectivity in central areas of Yerevan, buses on certain public routes, the metro, some railway stations, and several taxis.

During the armed occupation of a Yerevan police station, internet users reported that they were unable to access Facebook through major ISPs, including Armentel (Beeline) and Ucom. News reports said connectivity was restored within approximately 40 minutes. Facebook confirmed that access to Facebook was disrupted.

There are few reported cases of content removal. But in May 2015, an episode of the web series SOS TV satirizing the police response to protests in Yerevan was removed by YouTube. According to the lawsuit the police brought forth, the video undermines the honor and dignity of the police.

In the lead-up to the April 2017 parliamentary election, observers noted attempts to manipulate the online information landscape. In March, Twitter users circulated a fake email which purported to show that the US government was attempting to meddle in the election with the assistance of local non-government-organizations (NGOs). The content was removed but some, mainly fake users continued to share it. These bot accounts were tweeting similar content in Russian, which is understood by many Armenians. The purpose was to undermine public trust in the election.