Struga, 22 March, 2018 – 17:11 (Meta.mk) The state of freedom of expression in Eastern and Central Europe and Eurasia was the main topic of the first panel discussion at the second Regional Internet Freedom Summit, organized by the American Bar Association Rule of Law Initiative (ABA ROLI).

The panel discussion was attended by the HE Nina Suomalainen – OSCE Ambassador in Skopje, Robert Popovski – Minister without Portfolio in the Government of the Republic of Macedonia, responsible for communications, accountability and transparency, Ellery Biddle – Director for the Global Voices Advocacy network and Olga Kyryliuk from the Ukrainian organization Digital Defenders Partners. The discussion was moderated by Bardhyl Jashari – the Director of the Metamorphosis Foundation for Internet and Society from Macedonia. 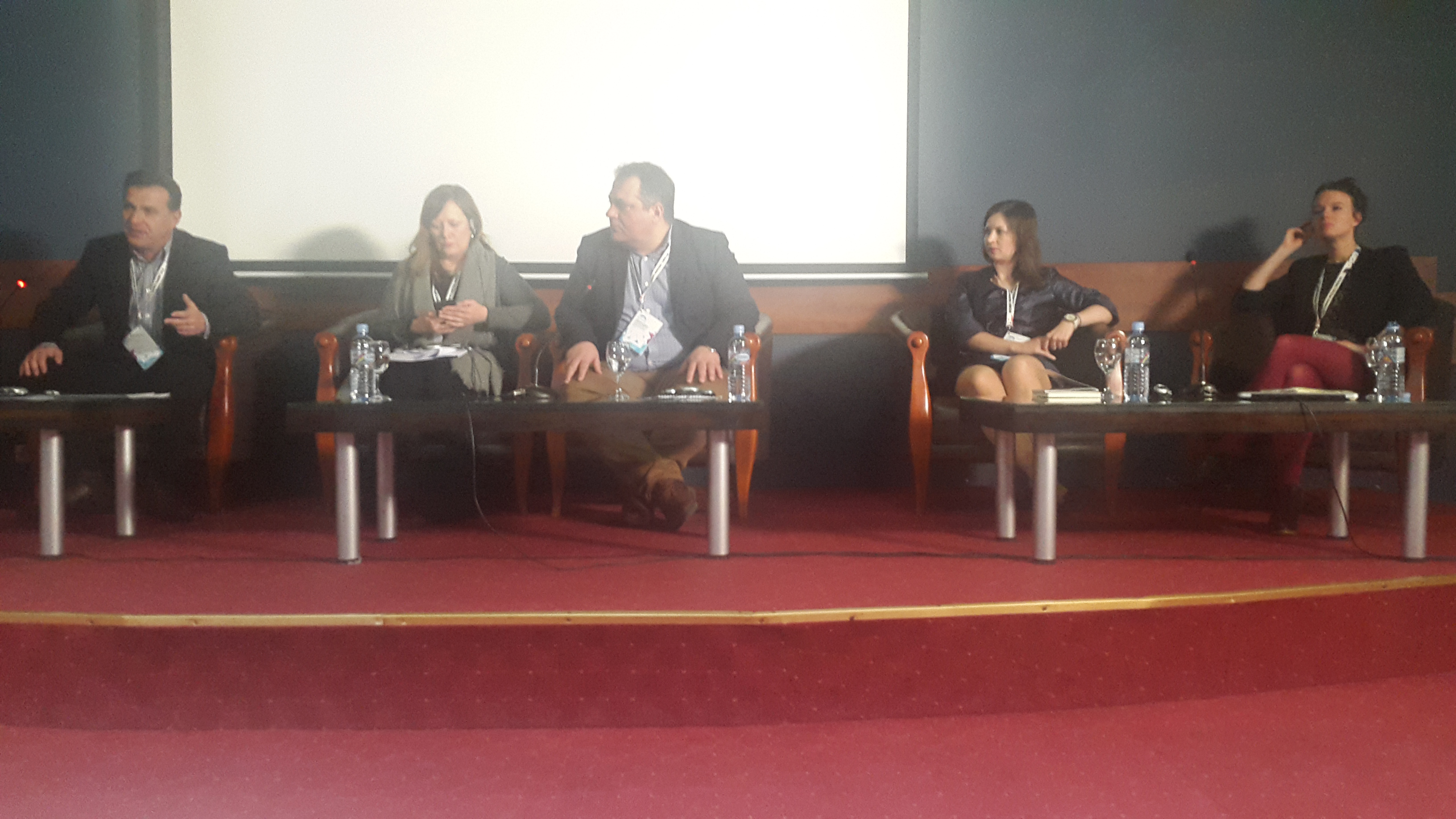 The participants of the first panel discussion “The Current State of Freedom of Expression in Eastern and Central Europe and Eurasia”.

Ambassador Suomlainen, quoting the OSCE’s previous media freedom representative – Dunja Mijatović, reminded that everything that is valid offline, is also valid online, even though the digital world is a relatively new one, it brings new challenges. Among other things, she said that the Internet and freedom of expression, unfortunately, are also a platform for negative phenomena such as hate speech and terrorism, but at the same time, she stressed that it is precisely this freedom that is also a tool for fighting terrorism through offering opportunities for social cohesion.

Minister Popovski reiterated the dedication of the new Macedonian government to remedy the dismal state of the media in the country brought during the previous 11 years under the previous populist regime. He noted some of the urgent reforms in the sector of media, including prohibition of government advertising in the media which was major element of corruption, new procedures for declassification and transparency are already increasing availability of information of public interest to journalist and other citizens. He noted that the the ongoing processes involving changes of the relevant regulation affecting broadcasting media, freedom of information, open data, and defamation include consultations with the journalist community, civil society and the expert public.

The possible option for online media registration mentioned by the Minister Popovski were strongly criticized by the Romanian representative, Bogdan Manolea, from ApTI, as well as from the representative of the Kyrgyz Media Development Center, who reminded that Macedonia is a member of the Council of Europe and that it should respect its declarations and standards. Other participants also noted the example of Serbia, where registration of online outlets is optional, enabling access to benefits and responsibilities assigned to traditional media.

Minister Popovski responded and said that this is just a proposal for debate and that the Government will never go against what the majority of journalist community would not agree with. He said that as former journalist who was subject to censorship he is dedicated to upholding the freedom of speech as public official also, with a focus on self-regulation rather than over-regulation.

Ellery Biddle from the Global Voices Advocacy spoke about the overreaching worldwide influence of Facebook and its internal rules, that is, about its right and obligation to take care of freedom of expression, as well as the (in) effectiveness of its moderation systems, especially for the languages ​​of the region.

Olga Kyryliuk, from the Ukrainian organization Digital Defenders Partners, among other things, mentioned the practice of filtering and blocking online content by some countries, warning that this threat to freedom of expression also involves violating international law.

After the introductory speeches, the panel was open for discussion with the audience, who provided additional questions and comments. Aleksander Isavnin from the Russian Internet Protection Society noted that in many countries, including Russia, government ministers have so far not taken part in direct question and answer discussions with civil society, and expressed hope that this example will be replicated across the region.

During the discussion with the audience, Aleksandar Icokaev, representative of IGF Macedonia recommended the recently published Final report of the High Level Expert Group on Fake News and Online Disinformation set up by the European Commission as basis for further action.

The Summit, held from 22 to 24 March in Struga, featuring over 120 internet freedom experts and human rights activists from Europe and Eurasia and representatives of international organizations, continued with plenary sessions and workshops divided into three main topics: freedom of expression, privacy and cyber security.