This article has originally been published by EDRI-Gram on 12.09.2018. Photo by Yemc, Public Domain via Wikipedia.

Recent political developments have affected the implementation of the reforms in the area of freedom of expression in Macedonia. The focus of government institutions on overcoming political obstacles to joining NATO and the EU had put most other reforms on the backburner.

The political tension in the Republic of Macedonia has increased in recent months ahead of the referendum, scheduled for 30 September 2018, which will enable the voters to express their opinion on the agreement signed with Greece in June in order to solve the long-standing name dispute. Fulfilment of the agreement includes change of the name of the country to Republic of North Macedonia, which is precondition for lifting the Greek veto that had been preventing Macedonia from joining NATO and the EU. Joining these alliances had been a long-term strategic goal of the country, in particular as a safeguard against internal and regional security threats.

Civil society organisations dealing with media had warned that changes to the electoral code made in July 2018, ahead of the crucial September referendum on NATO and EU accession, would re-introduce government-funded advertising in the media, which was abolished as one of the first steps of the overall long-term reform process.

In order to fulfil the conditions for accession to the European Union, Macedonia is required to continue the process of institutional changes, based on the Urgent Reform Priorities set by the EU in 2016. The URP include re-examining of the legal framework affecting freedom of expression. The four key urgent reform priorities area in the field of media and freedom of expression include:

1. Reform of the Public Broadcasting Service (PBS) in order to ensure its independence and increase the quality of its reporting and overall content production.
2. Establishing mechanisms for transparency and accountability with regard to government advertising.
3. Addressing the main obstacles which journalists face in obtaining access to public information.
4. Revising the legal and procedural rules related to defamation, and promotion of self-regulation and arbitration as alternative to court actions.

The pace of these reforms, which started in June 2017, when the new, pro-EU and pro-NATO government came into power, has been uneven and incomplete. According to the most recent periodical report by the Observatory of Media Reforms (OMR), a monitoring project by EDRi member Metamorphosis and partner civil society organisations PINA and Agora, most of the reforms had been only “partially fulfilled,” and some, like defamation legislation, has not been tackled at all.

Reform of the PBS at a standstill

The reform of the PBS is related to a wider reform of several so-called ‘media laws’ (Law on media, Law on audio and audiovisual media services, etc.) which also affect the composition and the mandate of governing bodies of the PBS and of regulatory institutions, in particular the Agency for Audio and Audiovisual Media Services. While the government has started the process of changing these laws, by the summer of 2018 it has come to a standstill due to complex set of influences.The government mainly has been pointing to filibustering by the parliamentary opposition as key obstacle, blaming the former ruling party for attempting to keep in office the members of governing bodies appointed by them. However, civil society has stressed the need to build public consensus on the final form of these laws in order to prevent setting legal loopholes which would enable the executive to exert undue power.

Meanwhile, the situation in the PBS Macedonian Radio and Television has been deteriorating, as it has been failing in its basic task to strengthen the cohesion of the society by providing unbiased information catering to the needs of all citizens, including various ethnic communities. Research by the OMR revealed severe lack of capacities, both financial and technical, including human resources.

In August 2017, the government declared that it will cease commercial advertising in the media and that it would continue to communicate with the public through the PBS and its social media presences, including sponsored Facebook ads. While not providing explanations about several specific issues within this area, for the most part of its first year in power it indeed ceased the flow of public money into private media, which was a key source of media corruption during the previous decade.
Legislative changes to the Electoral Code related to the implementation of the referendum, passed through fast-track procedure in July 2018, include provisions that the State Election Commission (SEC) can impose fines on the media for ‘unbalanced reporting’ and allow use of taxpayers’ money by state bodies for media campaigns.

Fearing that new legislation can “legitimize political propaganda in the media paid for by taxpayers’ money” several civil society organizations—the Association of Journalists of Macedonia (AJM), the Independent Union of Journalists and Media Workers (SSNM), the Council on Media Ethics in Macedonia (CMEM), Macedonian Institute for Media (MIM) and the Institute of Communication Studies (IKS)—condemned the interpretation of the new legislation by the SEC.

These organisations also started advocacy efforts warning various stakeholders about the possible negative consequences, which had been supported by European Federation of Journalists, and alerted the Council of Europe. AJM “expressed great concern about the recent amendments to the Election Code for the legalization of political propaganda in the media with public money and the indirect regulation of the online media, which could have a negative effect on the freedom of the media.”

Delayed consultations on Freedom of Information Law and other laws stalled

In August 2017, the Macedonian government started “addressing the main obstacles which journalists face in obtaining public information” by declassifying a range of documents which had previously been classified within the state institutions. It also provided free access for journalists to public interest databases owned by two state institutions.

The journalist community also demanded amending the Law for Free Access to Information of Public Character, in particular in regards to shortening the response deadlines. While the government indeed started the process of legislative changes, including public consultations on this law from January 2018, its conclusion is still pending. As the draft law has not yet been proposed, the Observatory rated this priority “partially fulfilled.”

In addition, no revision of the regulations related to defamation has been launched, in particular with regard to the Law for Civic Responsibility for Libel and Insult, as well as related procedural rules, which need to be aligned with the practice of the European Court of Human Rights, and the recommendation of the Senior Experts’ Group on systemic Rule of Law issues led by former European Commissioner Reinhard Priebe. While it expressed strong political will to support the self-regulation mechanisms, the government had not adopted concrete measures to do so. The Observatory considered this priority “completely unfulfilled.”

Like with other reform processes that had been put on hold due to the most urgent priority in recent history of Republic of Macedonia, the changes of media legislature are expected to continue after the 30 September referendum. 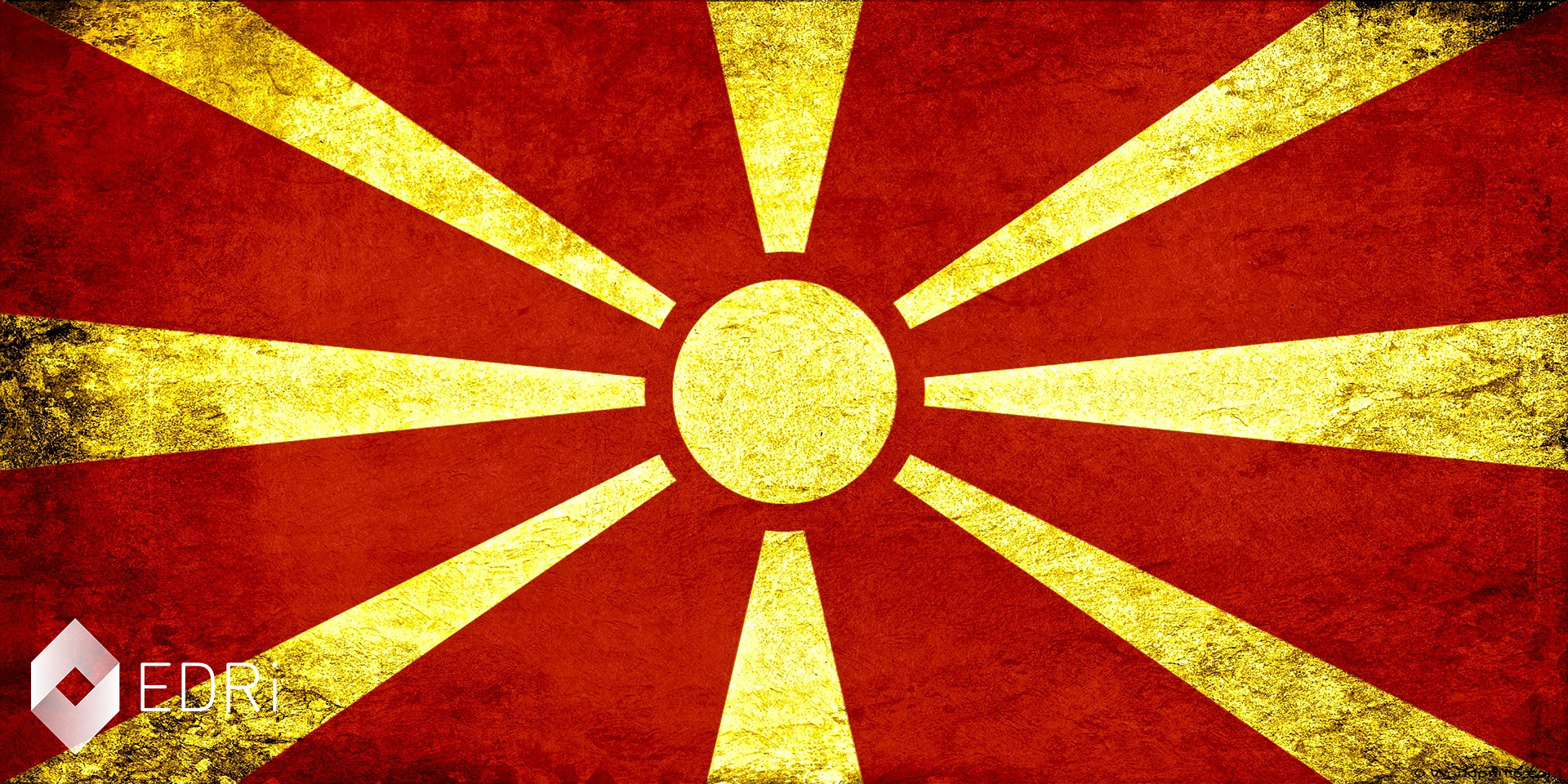 Observatory of Media Reforms – OMR (available in Macedonian and Albanian only)
http://mediaobservatorium.mk/

Current Media Laws, on the website of the Agency for Audio and Audiovisual Media Services
http://avmu.mk/en/legislation/domestic-legislation/laws/

Changes of media legislation in Macedonia are guided by the Urgent Reform Priorities
https://internetfreedom.blog/2017/11/24/changes-of-media-legislation-in-macedonia-are-guided-by-the-urgent-reform-priorities/

Manchevski: The opposition has been filibustering the media laws for four months (12.06.2018)
http://meta.mk/en/manchevski-opposition-block-media-laws-for-four-months/

MTV is on life support, has weak video signal and the secondary audio programming is nowhere near implementation (30.11.2017)
http://meta.mk/en/mtv-is-on-antique-life-support-has-weak-video-signal-and-the-secondary-audio-programming-is-nowhere-near-implementation/